Video Games: A Social Lifeline During a Pandemic

This post from our Game Generation: Voices series was completed in April of 2020, when much of the country was keeping a strict quarantine amid stay-at-home orders. Read how one quarantined person found a social lifeline through a love of games.

America is a nation on pause. Stay at home orders are in effect in cities and states throughout the country, keeping people from socializing with friends and testing their patience in the process.

While there are plenty of tools in the modern world to stay in touch, including Zoom video conferences, texts and a simple phone call, a growing number of people are using video games as a way to not only check with loved ones, but help to distract them from the monotony of staying at home all day, every day. 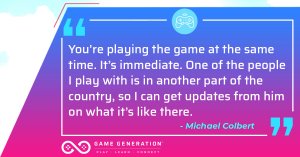 Among those is Los Angeles resident Michael Colbert. With Hollywood shut down, the set electrician is connecting with friends and colleagues – and keeping entertained – through games of Fortnite. Two or three times each week, he and his crew will jump onto a game to catch up, then let off some of the steam the pressure of the last couple months has generated.

“I was not playing as much before this,” says Colbert. “Obviously, I have more time now, but one friend just got Fortnite and, at my suggestion, brought a couple of friends along with him. We chat a bit at the beginning, but when things get intense, it becomes much more game oriented. When the eye of the storm starts closing in, we focus on that.”

Colbert and friends played more infrequently before the pandemic, a result of work schedules that sometimes resulted in 14-hour long days and were often not synchronized. And those games, when the did happen, were generally more focused on the gameplay than conversation.

“Given the situation, this gives us more of an opportunity to hang out, though,” he says.

Beyond checking in with friends in Los Angeles, video games are also a way Colbert can talk with people in other cities, helping him get a sense of what quarantine is like in their communities.

“You’re playing the game at the same time,” he says. “It’s immediate. One of the people I play with is in another part of the country, so I can get updates from him on what it’s like there.”

It’s that immediacy, he says, that makes video games such a good tool to stay in touch with people. You’re taking part in a shared activity that fosters communication as part of gameplay. And that, in turn, makes people more apt to talk about their own experiences and frustrations as the nation weathers the pandemic.

“Your mind can go off in a different direction,” he says. “It’s almost like you’re playing in the same room together.”