Sure, there are books and lectures and the usual classroom tools. But when it’s time for ninth graders at Lewiston, ID’s Sacajawea Jr. High School to learn about the scientific method, Schaper turns to video games.

It’s not the edutainment game you might expect either. Students gather in the school’s computer lab to play Project Havur, a tower defense title where the alien enemies evolve using biologically accurate models to win the battle. 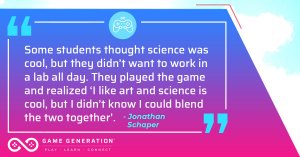 “The thing about Project Hastur is it doesn’t feel like any other educational simulations,” says Schaper. “A lot of the educational simulations are ok, but they’re not all that enjoyable. This doesn’t feel like that. The kids feel like they are playing video games, even though we were learning about what an independent variable is or what a compounding variable is or how to look at data an analyze it.”

Video games, he continues, bring some of the concepts of earth science to a level that makes it easier for students to understand, including testable hypotheses and predictive analysis.

Project Hastur lets students test their theories of evolution, adjusting variables as they evolve the alien Proteans or the defensive towers in the game and seeing the impact of those changes. (The game, in addition to a standard campaign mode, also has an “experiment mode,” which lets players tweak parameters and evolve creatures as they see fit.) When the round is over, students look at the data and are asked to interpret it.

Beyond the earth science skills, the game also shows students there can be a career for them in the scientific world, even if they find their real passion lies in areas that might seem unrelated.

“Some students thought science was cool, but they didn’t want to work in a lab all day,” says Schaper. “They played the game and realized ‘I like art and science is cool, but I didn’t know I could blend the two together’.”

Project Hastur is the second title from Polymorphic Games, a development studio based at the University of Idaho. All elements of it are created by teams of undergraduate students in a variety of degree programs.

The game sends enemies in waves, which represent generations of evolution. The enemy Protean that does the most damage each wave evolves and mutates, increasing the challenge.

Schaper has used the game with three classes so far, so it’s too early to conclusively discuss Project Hastur’s long-term effects. But, observationally, he says he has seen a real impact in how students comprehend scientific method once they’ve spent some time with the game. In fact, 20 or so asked for keys so they could keep playing at home.

“When I went through scientific method with them and didn’t use the game, I felt it was more of a challenge to get them to understand that,” he says. “When I used Project Hastur, I felt there wasn’t as much resistance in terms of understanding what those terms meant. It challenges them to think and the initial results are very encouraging.”