Video games can help people form social circles and make new friends, but that community doesn’t have to disappear when it’s time to put the controller away.

Dylan Higgins, like a lot of people, found himself cut off from his friends when stay at home orders were issued in his city as COVID-19 began to spread. He met many of those playing a video game, but since that title was best played in an arcade, staying in touch wasn’t quite as simple as everyone logging onto their Xbox, PlayStation or Nintendo system.

So Higgins decided to try something different. He took the streaming equipment from the arcade he worked at and launched a Twitch channel – called Killer Quarantine TV (KQTV for short). But rather than simply streaming himself (or others in the community) playing games, he turned it into the video game equivalent of cable access television. 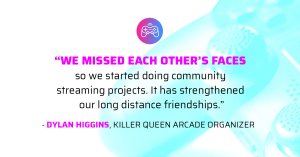 The first step was reaching out to the community – not just the friends he played with locally, but with the 500 or so players he regularly used to see around the country at events and tournaments centered on the game, Killer Queen, in pre-pandemic times. Would they, he asked, be interested in watching these sorts of shows and contributing content themselves? The answer was a resounding yes.

“We missed each other’s faces so we started doing community streaming projects,” he says. “It has strengthened our long distance friendships.”

Higgins admits that KQTV is hardly high art. The programming so far has ranged from makeup tutorials (teaching people how to look like Animal Crossing villagers) to a review of all eight American Pie films. There’s also a cooking show and virtual tours of people’s homes (dubbed Quarantine Cribs).

“It’s very much for us to entertain ourselves,” he says. “We’re not trying to grow or looking for viewers. We just miss each other.”

The bond of the Killer Queen community is notable since it’s so spread out. Local groups gather at barcades to play regularly – and Higgins says some of the people he sees locally are like family to him. But several times a year, major cities host tournaments and players will venture to other towns to connect with other fans of the game. And those friendships have proven to be remarkably strong.

“I’ve definitely made relationships and friendships with people I may have known for years, but didn’t really know before this,” he says. “But I know when I go to these other cities, I can see them every year.”

Higgins, in fact, was scheduled to travel from his home in Portland to San Francisco for a Killer Queen event in March, before that was cancelled due to coronavirus. And while KQTV helps the community stay in touch (as do other methods, including Discord, Slack and Facebook), he says he’s still eagerly anticipating the first trip to see them in person when it’s safe to travel once more.

“I don’t know the next time I’m going to go to Chicago or San Francisco or New York to see these people,” he says. “I want these people in my life. And when Killer Queen, the arcade game, is no longer the avenue to see … my friend everywhere, I will find a different way to spend time with them. I mean, yes, we love Killer Queen. It changed our lives. But that’s not why we fly around the country.”