A few decades ago, in the time before the Internet, multiplayer gaming was largely done in arcades. People would gather and play against friends and strangers side by side, one quarter at a time. And while there was certainly a competitive element, many a friendship was born over a game of Cybertron or Karate Champ.

These days, arcades aren’t as omnipresent as they used to be. Players generally congregate in living rooms with friends or meet people online. But that doesn’t mean the days of arcade socialization are gone – not at all. 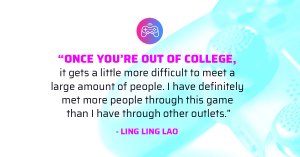 Just ask Ling Ling Lao. For years, she has been expanding her social circle through a game called Killer Queen, a 10-player real-time strategy arcade video game. While a home version was released for the Nintendo Switch in 2019, Killer Queen was designed with the arcade in mind. And it has gathered loyal player bases in in arcades and arcade bars through dozens of cities around the country.

“Since you generally only play in the arcade, it’s a very quick way to make friends and connections,” says Lao. “I met my boyfriend through Killer Queen. I’ve met a lot of my friends through this game.”

While the gameplay is the lure, a big part of Killer Queen’s appeal is the in-person social aspect. The further along you get in life, the harder it can be to meet new people. But just like in the 80s, arcade games are a low-pressure way to do so.

“I have definitely met more people through this game than I have through other outlets,” she says. “Once you’re out of college, it gets a little more difficult to meet a large amount of people. … A lot of people who have recently moved here [to Chicago] come into the arcade bar one night and people say ‘you should play with us.’ Within a couple months, you get to know 30 people who want to get together and join the community.”

The onset of the COVID-19 coronavirus pandemic has had an impact on that community, like any other, but rather than disbanding, Lao says the bond between Killer Queen fans has grown stronger. The Switch version lets them continue playing a version of the game they love, but they’ve used other tools to stay in touch as they do so.

“We hop on a Discord server and create our own little voice chat, so as we’re playing the game it feels like we’re hanging out in person,” she says. “It’s a way to stay connected with each other.”

Many have also started playing other online video games together to stay connected as they socially distance, such as some of the titles in the Jackbox Party Pack or Mario Kart Online. It’s fun. And it helps people socialize safely, but Lao says she looks forward to the time when she and, her friends can return to the arcade – and welcome new players in person.

“If you’re playing online against a stranger, you can make connections, but if you’re playing in person, you have to be nice, you have to be friendly,” she says. “Killer Queen encourages a lot of communication. … And when you’re used to meeting up with the same group of friends once or twice a week to play a game together, you definitely miss it.”