Researchers discovered long ago that video games improve the surgical skills of doctors, especially those who specialize in laparoscopic surgeries. But Sam Glassenberg is helping healthcare professionals take things to the next level.

Glassenberg, a veteran of Lucas Arts and Microsoft, is founder of Level Ex, a video game development studio that specializes in making games exclusively for the medical community. And, so far, over 600,000 medical professionals have spent time playing them.

“There are not games for consumers about medicine,” he says. “These are games for practicing doctors today.”

Level Ex makes mobile games that are free to download. Currently, it specializes in four areas – cardiology, gastrointestinal medicine, pulmonary and airway conditions. The games, which combine puzzles (diagnosis) and strategy, recreate the most challenging cases Level Ex’s collection of 150 advisor doctors have faced. And that forces player specialists to exercise mental skills they need to be good at their job. 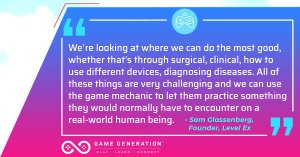 (A colonoscopy simulation, for example, forces doctors to look for maladies hidden under folded tissues. And tests how they react to unexpected, difficult scenarios – such as a polyp attached to a blood vessel.)

“We’re looking at where we can do the most good, whether that’s through surgical, clinical, how to use different devices, diagnosing diseases” he says. “All of these things are very challenging and we can use the game mechanic to let them practice something they would normally have to encounter on a real-world human being. And the Hippocratic Oath doesn’t apply to virtual patients.”

Glassenberg found his way into this field when his father, who is a doctor, asked him to create a game that taught how to do a procedure. Glassenberg, “literally out of guillt” threw an app together in three weekends and forgot about it.

A year or so later, he says, he noticed the game had been downloaded 100,000 times. And the feedback from doctors said it had made a difference in their real-world performance. Level Ex was formed within days.

The company has recently been tapped by NASA to build a training platform that will allow astronauts to practice medical procedures they might encounter in space, especially in longer distance trips (such as to Mars), where any communications with NASA might take three minutes or more to get a reply.

“We’re taking the technologies we’ve used for our terrestrial game and adapting them for space,” says Glassenberg. “For example, let’s say you’re nine months into the Mars mission and one astronaut grabs their chest and rolls over unconscious. There’s no MRI or X-ray. All you have is an ultrasound. … The heart physically changes shape based on the amount of time you spend in microgravity. So how do you know if what you’re looking at is normal for someone who has spent nine months in space?”

It’s a long way from the Star Wars games Glassenberg used to make.