Game Generation Voices: One Last Walk in the Garden

As cancer began its final assault on Roberta Firstenberg, it began taking things from her she had long loved and taken for granted. Chief among those was the ability to take a simple walk around her yard.

Granddaughter Priscilla Firstenberg managed to outwit the disease, though, through video games and virtual reality.

Priscilla – Pri, for short – was a video game artist at the time and had recently debated the merits of VR with coworkers. The Oculus Rift was just coming out at the time and she decided to reach out to the company to explain her grandmother’s situation. 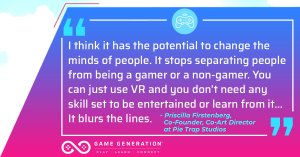 She never expected to hear back, but within a day, she received a reply, saying a unit would be there shortly. Before long, Robert was able to take a virtual stroll, both in a computer graphics world and in a demo that uses Google’s street view, where she was surprised to find a picture of her younger self walking her dog.

“I wasn’t really expecting it to be emotional. I thought it would just be like a fun thing to show her,” says Priscilla. “She as amazed she could walk again. She could go up the stairs in this simulator, because she couldn’t do that for months. She also got to experience a season one last time.”

Four weeks after she first put on the Rift headset, Roberta passed away, but her time in the virtual garden not only gave her some comfort in her final days, but also showcased how video games can transport people to worlds they can’t visit, even if that’s right outside their door.

The VR headset gave Roberta back the liberation that was a cornerstone of her life. She was a single mother who instilled a sense of independence in her granddaughters. She loved baking, arts and crafts and time in her garden. She was especially fond of kittens and butterflies, and lit up with excitement when she saw butterflies in the VR stroll.

She was even a bit of a video game fan herself, with a fondness for hidden object games. When she wasn’t able to move as well, because of her illness, Priscilla got her an iPad and loaded it up with those sorts of titles.

Roberta wasn’t much into technology, though, which made her experience in VR have such a strong impression on Priscilla, who’s currently Lead 3D Artist at Circuit Stream, focusing on making VR simulators for clients.

“I think it has the potential to change the minds of people,” she says. “It stops separating people from being a gamer or a non-gamer. You can just use VR and you don’t need any skill set to be entertained or learn from it. … It blurs the lines.”