Like a lot of children of the 1980s, Steve Kleisath spent most of his free time in the arcade.

Somewhere between 1981 and 1983, he discovered the quarter gobbling machines – and the culture that surrounded them – and he knew that he was hooked.

“It always seemed a very good place to escape or socialize between school and home or school and work,” he says. “At the time, there were so many games being pumped out that every 3-4 months, you had a new favorite to try out.” 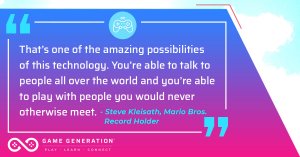 He had several favorites – including Ms. Pac Man, Joust, Galaga and Frogger – but the one that he really took to was Mario Bros. And in 2015, his ongoing love affair with the game hit its apex, as Kleisath became the world’s best at Mario Bros, with a staggering score of 5,424,920.

The Super Mario achievement isn’t his only gaming feat. Along with Stephen K. Boyer, another big name in the old school gaming circles, he has set two new world records in co-op Mario Bros. (Kleisath, for the record, played as Luigi.)

“The difference between Ms. Pac-Man and Mario is in Mario it really takes focus and skill, but with Ms. Pac-Man you can do your best to get all the fruit and ghosts, but it ultimately comes down to luck, because you don’t know what fruit is going to come out. A cherry is worth 100 points, while a banana is worth 5,000. If I had gotten more favorable fruit down the stretch, it might be different.”

Earning those achievements takes a lot of practice time. Before posting the Mario Bros. score, Kleisath practiced for roughly eight months. Of course, while it’s possible to make a living as a modern pro gamer, there’s not a lot of income in scoring records on classic arcade games. When he’s away from the joystick, Kleisath is co-owner of a limo company in Ft. Lauderdale, Fl. and the drummer in two bands, including Further Seems Forever.

It’s the very collaborative nature of those gigs that makes gaming so appealing to him.

“The real draw for me is accomplishing something without needing help from someone else,” he says. “I’m the drummer. I’m the master of one trade as opposed to a jack of all. I can’t sing or play guitar or play bass, I have to count on other people, their schedule and motivation to be able to come together and perform. Even with my job that I do, this is the one area of my life that I’m in control of. I know if I practice or put the effort in, I can accomplish the goal I set out to do.”

Kleisath still plays arcade games, but these days it’s more on Twitch, where he’s both able to connect with people with common interests and inspire younger players and, until recently, used an emulation program to play doubles games with people from around the world.

“The classic arcade community is smaller and more intimate than the larger video game world. I’m 47 and there are people my age here, but there are also people who are a lot younger that still tap into these games. That’s one of the amazing possibilities of this technology. You’re able to talk to people all over the world and with [another program] you’re able to play with people you would never otherwise meet.”

You won’t find him playing more recent games, he says, since he prefers to focus on one title until he becomes and expert at it – and he doesn’t have the time to dedicate to one right now.

As for that record? Kleisath says he’s proud of it, but knows records are meant to be broken – and he looks forward to the day that ultimately happens.

“If anybody breaks the record, they can have it,” he says with a laugh. “I don’t think I could sit there for six hours again.”