There are some children who never get invited to a friend’s birthday party and who don’t have any friends – or don’t know how to make them.

Whether it’s because they’ve moved around too frequently in their lives, or they’re exploring their gender identities, or have turrets or some other disorder, bullied, or some other reason entirely, they haven’t been able to develop the social skills necessary to bond with others in a meaningful way.

The power of play can help people, young and old, who suffer from this isolation to develop those skills. 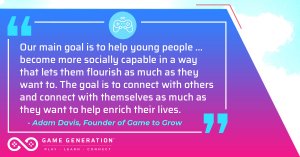 Adam Davis is the founder of Game to Grow, a nonprofit organization that uses games to help people develop their social abilities. While it’s best known for its use of Dungeons and Dragons, it also works with Johnny Spangler, a Seattle-based counselor for adolescents and young adults, to incorporate video games into the process.

“It’s immediately familiar to the segment of the population we’re working with,” says Spangler. “People can come into it and they’re already a native language speaker. They don’t have to learn the game as well as the things I’m layering on top of it.”

Whereas the board game groups in Game to Grow work on fostering shared experiences that can serve as conversation starters for young players, Minecraft sessions have a different goal.

“The social skills we’re producing … are more along the lines of ‘how do I put myself in the mind of another person?’,” says Spangler. “We’re teaching them how to play nicely with others. For instance, how do I approach an environment and figure out what the norm is? And all of that is done through play.”

A lot of that comes through the creations people make in Minecraft. Those are expressions of who they are as a person. And learning not to respect that is a big step for some players.

“It’s about a shared interest or passion,” says Davis. “What’s nice about a game is it play. And real play is a reduction in anxiety. Real play … lets their nervous systems calm down. That’s the magic of games.”